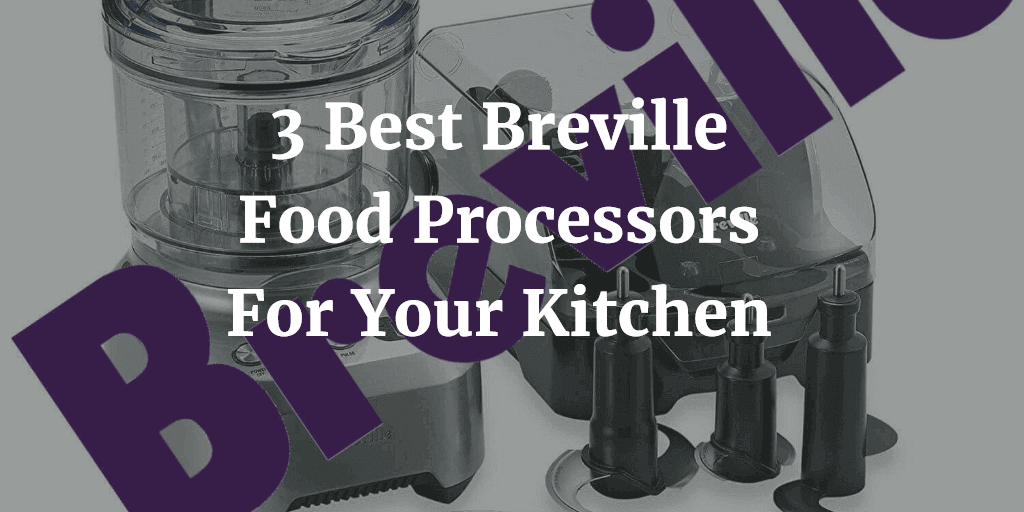 Breville is a food processor manifacturer that is based in Australia. It was founded in 1932 by Bill O’Brien and Harry Norville. First they started to make radios and minde detectors for the military, but later switched to kitchen applications.

Since 2002, the Breville brand was launched in the US and Canada and started it global expansion. Products from Breville can be bought in 30 different countries including nearly all countries of Europe, Brazil, China, Israel, Mexico and South Africa.

Breville has over 10 different food processor items in their assortment. Ranging from the typical food processors to immerson blenders and juicers. Hence, they provide a wide range of food processing applications. You might now wonder what makes Breville special compared to other brands such as KitchenAid, Cuisinart, Braun or Hamilton Beach?

Let`s have a look, why Breville is so successful.

Why buy a food processor by Breville?

Over the last decade Breville has made many inventions to the food processor industry. They first introduced their model in 1977 and improved it till now.

In 2011 the film Fat, Sick & Nearly Dead coverd in particular the food processor of Breville and doubled their sales in the course of several months.

Furthermore, Breville constantly creates new products such as a temperature controlled conducting cooking system. It is definitely save to say that Breville will contiually improve their products.

Still you might now think that Breville cannot be better than KitchenAid, Cuisinart, Braun or Hamilton Beach. Below we compare Breville against the other popular brands.

How Do Breville Food Processors Compare To Other Popular Brands?

Last year Breville sold less products than the year before totaling a revenue of $527 million, which is down 2.7% over the prior year. [1] Still compared to other brands Breville is one of the main brands on the market for food processors.

By aquiring the US based company PolyScience Culinary it seems that they set their focus on innovation. But large companies often put the interests of their shareholders infront of their customers.

Will this happen to Breville? Let`s compare Breville to their largest competitors in the food processor market

Is Breville better quality than KitchenAid?

Buying a Breville food processor or a processor by KitchenAid are two different things. With the first you can expect that you will have the kitchen application for a long time, with the second you will probably have to replace it somewhen.

Cuisinart has stood for quality. Quite recently Cuisinart had to recall a lot of their food processors, because the blade was badly manifactured. No incidence has been reported with the Breville company yet, which is also much older than Cuisinart.

Even though the recall mission of Cuisinart is done in a really proper way, using a deticated support site and a well trained support team, the lack of customer trust will take years to built up again.

Is Breville better quality than Cuisinart?

Yes, Breville provides better than Cuisinart. Besides the recent events Breville operates with most of their products in a much higher price segment and offers much better products to customer.

Braun is a germany based consumer focused company. Since 2007 Braun is owned by Procter & Gamble and became a subsidiary of The Gillette Company. The roots of Braun go back to the early 1920s,which makes the company as old as Breville.

In the beginning Braun manifactured products for the war, such as radios. Today Braun can be found in bathrooms, kitchens and even produces clocks or projects.

Is Breville better quality than Braun?

Braun stands for German quality products. Even though both company operate in the same price segment – with comparably similarly featured products – Breville food processors are not as good as Brauns. We can call it a tie.

Hamilton Beach is our oldest company on the list and was founded 1910. Besides having a lot of other kitchen applications, they have a large range of food processors. Their cheap food processors – Hamilton Beach 70740 8-Cup Food Processor – are extremely popular and have been reviewed by thousands of people. It is a well designed processor by a kitchen focused company.

Let`s call it a tie. Breville and Hamilton Beach both produce high quality products and are a quality indicator for every kitchen.

Is Breville better quality than Oster?

The Best Breville Food Processors For Most People

One of the best food processors on the market is the Sous Chef BFP800XL. The processor comes with 5 multi-function discs and 3 blades. The 5.5 inch super-wide feed chute allows to process extremely large ingredients, so you do not have to pre-cut most ingredients beforehand.

All parts of the food processor are BPA-free, which means that you do not have to fear any long term effects on your health by using this processor. The Sous Chef BFP800XL comes with a large 16-cup work bowl and a 2.5-cup mini processing bowl.

The integrated display can show count-up/-down auto timer and the processor can be programmed to cut, chop or even knead.

If you are using your food processor for more than just cutting or mixing baby food, we highly recommend the Sous Chef BFP800XL from Breville.

Breville produces and sells several thousand food processors per year. Even though the large Australian based company does not focus on food processors in particular their kitchen helpers are extremely well manifactured and they offer a great customer support.

We highly recommend the Sous Chef BFP800XL from Breville, which comes with everything you would like to have. Furthermore, their other products are as recommendable as the Sous Chef.

If you haven`t decided on a Breville food processor yet, the how about that one? If you want a solid and long lasting food processor then Breville is definitely for you!